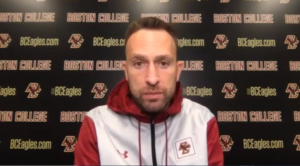 “Coach Collins has done a nice job at Georgia Tech. They have two really impressive wins against Louisville and Florida State. They’ve been in some really tight games. He brings a lot of energy, you can tell they play really hard. He’s very detailed, you can see how they act on the sidelines, he brings a lot of juice and in his second year there he’s done a really nice job. You can see the recruiting that he’s done with some of the young freshmen that are stepping up and doing a really good job.

On the offensive side of the ball, they’re coached really well. They got two really good young players in their quarterback and the running back. Dynamic athletes, #21 is really fast and explosive, he catches the ball well out of the backfield. Coach Patenaude has done a really good job with them. Their quarterback can throw it, he can run it, and he’s only a freshman. So again a credit to Coach Collins for recruiting those guys and playing them early. You can see they’re getting better every single week.
They have some pretty good receivers #1, #2, and #15. Number 2 can fly, one of the fastest guys we’ve seen on tape. Number 15 has got some good size, and their O line is solid. They do a lot, they’re really well-coached. They’ll spread you out and run the football. They’ll run the football with the running backs and the quarterback. They’ll throw the ball down the field, and get the running backs involved that way. They’ve been pretty effective this year.

On defense, they’re really well-coached. Their middle linebacker is a good player, I believe he’s #6. He’s like the quarterback back there. They’ll play some split zone safety, some middle close, they pressure. They’ve got really good length on the back end which I like. Those guys are really big and long. They play hard, and they cause a lot of issues. Just watching some of that tape early on in the week, I like the scheme. Overall a really well-coached defense.