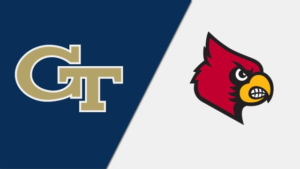 Both teams began this odd season with some optimism by winning their openers. Then a few wheels popped off as both teams dropped their next two. Each will get a chance to get back on track in this nationally televised ESPN game.

For the Cardinals, their setbacks came at the hands of a pair of good ACC teams in Miami and Pitt. That came after a 35-31 win over Western Kentucky.

The Yellow Jackets impressed out of the gate with a 16-13 upset at Florida State. That didn’t last long as UCF and Syracuse took care of business.

This will make only the second time these two teams have met in football. The first matchup was two years ago when Tech doubled up the Cardinals 66-31. Some are predicting another doubling, but with different results this time.

Louisville is led by head coach Scott Satterfield, who used to coach with GT head coach Geoff Collins. Collins refers to Satterfield as a “dear friend.” That collaboration happened ten years ago as they helped turn around a struggling Florida International team, taking the Panthers from last place to a USA Conference championship along with a bowl victory.

The Cardinals are well rested coming off a bye week.
“We were able to get some guys healed up last week and I think that we are in pretty good shape,” the UL HC said during his weekly teleconference. “We should have all of our guys available for this week.”

Tech is led by a pair of talented freshmen in quarterback Jeff Sims and running back Jahmyr Gibbs. They lead the team in rushing combining for 383 total yards. In the air, Sims has been uneven with eight interceptions and three touchdowns for 695 yards.

“I know he likes to bring pressure, he’s a very aggressive coach when it comes to the defensive side of the ball,” Satterfield said. “He wants his kids to play fast and cause havoc on that side of the ball.”

Kickoff is set for 7:00pm. Remember, no tailgaiting allowed again for this one.