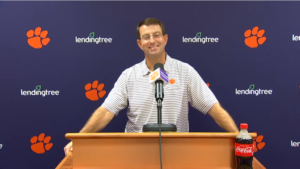 “We’re excited about getting back on the road this week. We have been home three weeks in a row, so looking forward to heading down to Georgia Tech and playing a much improved team. Geoff (Collins) has done a great job. When you watch film, you can see certain things as a coach. This team is playing with confidence. They believe in each other and they don’t quit. Got down 17-0 to Syracuse and didn’t flinch. Battled all the way back and won the ballgame. This is a program that is headed in the right direction.

“The next step for us is cleaning up some of the mistakes we’ve made and playing a complete game for four quarters in all three phases.”

“The quarterback is their leading rusher. Got a really big arm. He’s a good one. He’s big, athletic. He’s not afraid to push the ball downfield. He showed some toughness. They have done a nice job with equipping him with tools to be successful.
“He has made mistakes along the way but he’s corrected those and he’s taking better care of the ball. He can make any throw. He made a throw in the back of the end at Syracuse — their guy dropped it — but it was a great throw. He’s got a bright future. That’s why they’re starting him.

“At wide receiver, No. 1 (Jalen Camp) and 15 (Malachi Carter) are two big-bodied, strong-handed guys on the outside. No. 2 (Ahmarean Brown) in the slot is really quick, really fast and a little bit of matchup problem.

“Really got the run game going and you saw that vs. Syracuse and Louisville. Think they’ve found some really good backs there. The freshman, No. 21 (Jahmyr Gibbs) , is really a good young talent.

“Offensive line is well-coached. And schematically, they do a nice job with their tempo, counters, stretch, and zone read off it.”

“Defensively, they have six starters back. Very experienced in the secondary. Think there were a couple of injured guys that are back, and expect them to really be a big challenge for us. They’re putting their guys in position to be successful.

“Probably have one of the best punters (Pressley Harvin III)  that we’ve seen. Feel like he’s been there for seven years. He is a great, great punter. Big leg.”