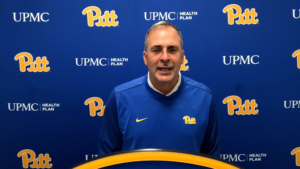 Got a great challenge on the road again, headed down to Georgia Tech, and I think a tough football team. When I watch tape on them, really all three phases you see a physical team. You really do. They’ve got a young football player in Jeff Sims that’s athletic. He’s a freshman from Jacksonville, Florida, that we recruited a year ago, so we know who he is. I know what he looks like; I know he’s not six foot; I know he’s probably more 6’4″-ish. I know he’s athletic, he’s got a great arm.
And then defensively, again, Geoff Collins is a defensive guy and they play hard on defense. They’re sound, and they make plays.

Q. Were you surprised going back when the schedule was revised and you found out you go to Atlanta two years in a row? What were your thoughts when that came out?

PAT NARDUZZI: You know, just what am I going to do? I shake my head, like okay, I’m just hoping — you can’t just say it’s a COVID year, it didn’t matter and they only had to come up here and repeat again.
We like going down there anyway, so just another long road trip and our kids have done an outstanding job with that, preparing for it and taking care of business before we leave, and obviously on that trip last week having all our meals in a tent was interesting to say the least, and our kids just kind of didn’t matter. We came down there for a reason, to win, so we’ll travel wherever we’ve got to go to go play the game.

Q. Are you starting to see this Georgia Tech team look, I guess, less like a triple option team and more like a Geoff Collins team at this point?

PAT NARDUZZI: Yeah, I mean, you see the — you see a transition for sure, and they’re a lot better football team than they were a year ago. Obviously they gave us issues last year. I think they’re tough. I think he’s got his culture built there. He’s still recruiting, but when I look at their offensive line — because defense is defense. It doesn’t matter, nothing changed for the defense except their defense gets to play against normal offenses during summer camp. But the biggest change was what they’ve done with their offense, and I think they’ve done a great job offensively as far as what they do, how they do it, what they’re trying to do.

Like I said, the Jeff Sims kid is a young guy. They’re playing a — I think he’s going to be sharp, and he’s got a nice arm. He’s smooth. He knows he can read coverages. You see him look off stuff, he’ll go over here and go from one, two, three, so you see him reading the field. He’s not just throwing RPOs. But they will throw some RPOs for sure this weekend.